One of the most popular posts in the blog is the shortcut key in windows to ‘show desktop’. I love shortcut keys, but they’re all different on the Mac so I’m having to learn them all over again.

Here are the one’s I’ve found so far along with their Windows equivalent;

It also doesn’t have a right mouse button… I’m still learning to live without that but haven’t quite memorised the shortcut. I’m also finding gestures a little hard. While I’m remembering to use two fingers to scroll the page (my previous HP had a scroll function on the right side of the mousepad area), I’m finding a feeling of fatigue in my fingers similar to that I remember from learning to type or play the guitar. I like the principle of the gesture control though, so I suspect I’ll wonder how I managed without it once I’m used to it.

Update May 2012 – For some reason Fn + F11 isn’t working for me any more. So, I looked in [apple menu top left of screen] > System Preferences > Mission Control and I see the shortcut is: [ctrl] + [down arrow]. Maybe I got it wrong before, maybe I changed it and forgot, maybe it changed with an update… but this is what it is for me now. 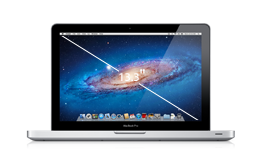 My trusty HP laptop (nx6325 circa 2006) has finally reached retirement.

Actually, as a PC it was running fine. It’s processor was expensive for it’s time (a 64bit dual core AMD) and routine improvements (memory to 1.5GB, hard disk to 256Gb, 2 replacement batteries) had extended it’s life nicely. The reason for replacing was the screen backlight becoming to dim to work effectively. For years I’ve been using it connected to a desk monitor for everyday use and it only became apparent this month when I needed to display a document on my laptop monitor alongside my desktop monitor while I worked. While I have a reputation for spending little money on computers and extending their life beyond many others it wasn’t worth buying a new screen or replacing the backlight… at least, not for work. I may well play with doing that just because I can, but I can’t be without a decent laptop for work.

So, what to go out and buy? A mac! Well, no, at least, I thought a mac would be far too expensive and then I’ve got all the incompatibility issues to deal with. That was, until I spent my mandatory several hours investigating models, options and prices. To cut a long story short, the cheapest 13″ Macbook Pro worked out for me to be the best option for price and performance. Note here, I said “for me”. My needs are quite specific. I expect my IT hardware to last a long time (I look after it, I’m happy to pull it apart and repair/update things, I don’t need the latest & greatest processor or connectivity ports). I compared Sony Vaio, Asus, Toshiba, Lenovo and hunted through reviews on many different IT sites. As a quick summary:

The Macbook Pro won on a combination of:

It was equal on:

On the subject of price, I bought it from a local (Whitstable based) company called Serviceweb who are Apple Authorised Service providers. The total order was for;

and the total cost 1095 + VAT (1314 inc VAT @ 20%).
Considering that even for the HP I would have needed to buy a second power adapter the Mac was surprisingly well priced.

So, I’ve spent a couple of days using it so far, and so far, so…. average. Yes, average. I’m learning the new shortcuts quick enough. I knew it would take a while to get used to that. However, I’m also finding a few bugs. Or perhaps they’re not bugs, maybe they’re ‘features’ as no easy solution is jumping from google searching. Anyway, more on those next post, along with the essential shortcuts I’m discovering.